His Arms Around Me 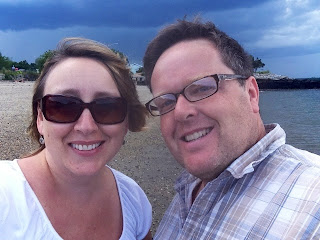 Yesterday morning I awoke to the feeling of my husband’s arms wrapping around me. It’s a beautiful thing to be married to your best friend, and this summer, with the canyon of grief and pain I have struggled through following the sudden loss of my father, I have once again been reminded of how lucky I am to have trusted my gut all those years ago when I first met Eric.

We met on an early summer church youth group trip to a rock slide near my hometown. Being three years older, he was in the senior section of the fellowship group. I was in the junior section. I had joined the group to be with my friends, as my own church did not have a youth ministry. My middle school boyfriend was in the group too, and I remember he was rather annoyed at how my face lit up when I watched this older teenager who was easily the center of attention. Eric was (and is) a happy, easy-going guy, quickly striking up conversations with people, affectionate and flirtatious. I couldn’t keep my eyes off him, much to the dismay of the boy I was dating at the time. When Eric came by us and offered to take a picture of us, I couldn’t help but feel awkward over the whole thing. After that outing, I spotted Eric mowing the church lawn one day as I rode by. I pointed him out to my Mom who was driving and I remember laughingly asking my Mom to “Drive around the block one more time!” My Mom giggled when this became a regular request of mine throughout the summer.

When the school year began, I saw more of Eric. I was now a freshman in high school and he was a senior. I knew my place, being so much younger, and I never imagined this older teen would notice me, but he did. We began flirting with one another. Eric started taking me home last, after dropping off everyone else who had begged him for a ride home from school, practices, and the like. Our first official date followed a pep band obligation at our high school. Dressed in our matching white pants, white turtlenecks, and blue school sweaters, the two of us split a small fry and a coke at McDonald’s. It was the start of our February vacation and over the next several months, we became inseparable. I remember the exact moment when I knew I had fallen in love with him. We were in his car, parked in my driveway, and he started laughing over something funny I had said. Something in my head and my heart just knew, at that moment, that this was real.

But we were young. Eric went to college that fall. I could not completely commit to a far away boyfriend, and I dated others, but Eric stayed in the picture. He never dated anyone after me, and when I realized I didn’t want to risk losing him, I stopped seeing others too. I went to college and we married in my junior year. I was just 20 years old. That was nearly 25 years ago. College degrees, careers, setting up house, children, so many adventures....our life together has been rich.

But there have been rocky times too. Times of misunderstandings, times of heartbreak. To fall in love at the age of 15 and to be with that person thirty years later is remarkable to me. It appears that we’re a rarity. Those thirty years have not always been easy. We grew up together in the years of our marriage. And we made mistakes along the way. Sometimes, there weren’t mistakes, only the situations we found ourselves in. This last year has been especially hard. It was about one year ago that we learned his Mom’s cancer was back in force. She died three months later. Just as we were coming to terms with that loss, my father died unexpectedly. In the two months since his death, I have been met with extenuating situations that have only complicated my grief. But through it all, Eric is there for me.

When my parents came to our home for Christmas that last time, in December 2011, my Dad spoke to me from the heart (as he always did). Dad said, “Anne, you know, we are all part of a family when we’re born. But then we fall in love and we choose to spend our lives with another. Together we raise children, and we love that family we’ve built together very much, but over time, those children grow up, and each of them leaves to build lives of their own with others. And we return to being with the one we chose, the one we fell in love with”.

Yesterday, my grief, despite the warmth I felt upon waking in Eric's arms, was making me restless. I needed to "run away". After not taking my hints, I sat down on the couch next to Eric and I insisted to him that I had to get out of the house. "Where do you want to go?" he asked me. "To the woods or to the water. I don't care. I just need to go. Will you go with me?" I asked. "Yes", he replied quickly. Within five minutes we were out the door. We headed to the water. At the ocean we walked, we took in the sights, we strolled the beach, we outran a thunderstorm. We took in a stupid movie, ate popcorn, and chocolate. It was what I needed and I returned home with a calmed spirit.

Eric and I share a belief that we were always meant to be together like this, and I suppose what it comes down to is that we’ve continued to make choices that strengthen that belief. There are times when he or I could have chosen differently. We could have chosen to give up, to stop trying, to give in to pain and to let it conquer us. We could have gotten too comfortable, too complacent, too lazy. We could have been too proud, too fixated on being right, too offended by a careless comment, too frustrated with the other. Instead, we keep choosing each other...we continue to fall in love, year after year, day after day, hour after hour.
Posted by Anne at 11:27 AM