Several Funerals and a Wedding 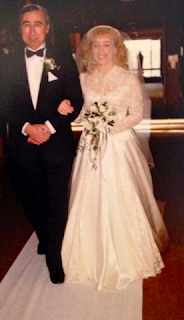 With two elderly grandmothers, my great-uncle, and a handful of great-aunts, attendance at wakes, funerals, and cemeteries were a natural part of my childhood. I was never uneasy when I went to them. In fact, as my Mom used to tell people, at Aunt Irma’s wake, I even reached over my aunt in her casket and kissed her goodbye. I remember going to a number of funerals at St. Louis’ in Auburn. The ornate church was pink inside with numerous paintings. I can still recall sitting in the pews, gazing up at the beautiful arches. After the service, I followed my parents out of the church. Holding Mom’s hand, we stepped into a black limousine for the ride to the cemetery.

I never feared these services as a child. When I moved away from home, however, my attendance at funerals became less frequent, almost non-existent. There were a couple of heart-wrenching funerals for students of mine who died in accidents. At those, I steeled myself to face the faces of teens I knew who were also in pain. I went to a few wakes also, those for parents of a few of my friends. And then, a few years ago, my Dad called me at school, asking me if I would come home to sing Ave Maria at the funeral Mass of my Mom’s best friend, Pauline. I never considered saying no. So home I went. I stopped on the way to buy a dress and a new pair of shoes and I arrived at the church early enough to practice with the accompanist. I sang the song but I felt a little shaky. Instead of gazing up at the arches of the church, I saw the faces of Pauline’s children and grandchildren and memories of visiting Pauline over the years of my childhood flooded my head. In adulthood I had become so much more aware of the passing of time and of how sad it is to say goodbye to a loved one.

At my Dad’s funeral two weeks ago, I experienced something new. Knowing Dad had asked me to sing a few songs, I enlisted the help of my two daughters. I somehow knew that if I stood to sing alongside Sydney and Emma, I would find the strength to do as Dad had asked. I was right. Sydney played guitar and Emma harmonized as I sang my Dad’s favorite hymn, On Eagle’s Wings. The girls and I cantored the entire service and after Communion, I stood to sing Ave Maria. Unlike the way I had felt at Pauline’s funeral, this time I was completely calm. I sang easily. Every measure of music was an offering of thanks for the years I had with my father. I read my music but I looked out over the congregation of my family and Dad’s friends and I knew I was giving Dad the gift he had asked for. I think I even smiled.

There was no wake. There was no casket. No limousine ride. No visit to the cemetery. Dad had been specific with what he had wanted for his service and as in life, he was frugal. But it was a beautiful send off. I saw Dad’s children and grandchildren taking part---reading, carrying his urn, singing, speaking, honoring the good man who had helped raise each of us, and in my brother John’s face, I saw Dad’s pride that I had followed through with Dad’s wishes and had sang at the service. I don’t think I will ever forget seeing my Dad in John that day.

After the Mass, as we greeted those who had come to pay their respects, I embraced Dad’s loved ones and listened intently to stories and well wishes. After the people left, as I gathered up flowers, music, and programs, I took one more look inside the church where my parents had brought me to Mass each week. I saw my Dad sitting in his pew. I saw him lectoring. I saw him serving as a Eucharistic Minister. I saw him walking me down the aisle on the day of my wedding. I gazed up at Jesus on the cross and I told Him to take care of my Dad, the man who had most powerfully led me to my own faith. Turning back to find my husband and my children, I then crawled into my own limousine, a dented black Grand Caravan, and together we drove away.
Posted by Anne at 6:01 PM