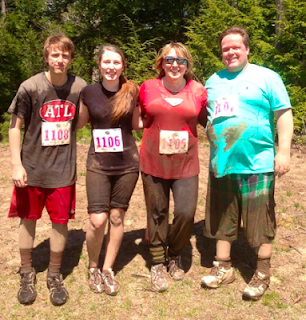 A week or so ago, I took my husband and two of my children to a mud race. I had somehow hoodwinked them all a few months earlier into agreeing to do this messy obstacle course. I signed us up to be a team of four and paid the registration fee quickly before any of us changed our minds about participating. I was shaking my head as the race date approached. I was scared that I was not going to be fit enough to do the event. But despite the anxiety, I couldn’t wipe the smirk off my face every time I thought about it. I was genuinely excited about the idea of pushing myself out of my comfort zone, forcing myself to achieve what I knew, down deep, I could indeed achieve.

The four of us, donned in silly Avenger costumes no less (as was a requirement of all teams), arrived at the race, signed in, and waited for the announcement to call us to the starting line. With an enormous mass of people, we counted down, “TEN, NINE, EIGHT, SEVEN, SIX, FIVE, FOUR, THREE, TWO, ONE!” and began running. The kids patiently slowed their pace to accommodate Eric and I, and we all laughed as we burst through the first surprise, a cloud of paint. We were racing. We were running together as a family. Smiling at the chaos around us. Laughing. I felt my energy surge. A fleeting thought of, “I can’t run. I’m not in shape for this”, ran through my head but I squashed the thought when I realized I WAS running. My body was there for me. I had two children on either side of me and a whole mass of people running with me and I was keeping up. Sensitive to my husband’s pace, we slowed down and began walking at different intervals, but I could not help but feel victorious. We were only in the first 10 minutes of our journey.

We saw the dirt path in front of us. “Here’s where the mud will begin!” we heard others shouting. SPLASH! We hit the first muddy stream. We saw some charge through and we laughed as we saw mud splattering up on us for the first time. The mud pits continued to greet us, some of them requiring us to crawl on our knees or bellies to get through. Towering hay bales, water filled milk jugs to be carried up and down a muddy hill, giant saw horses, and Chinese jump ropes strung from tree to tree all met us to challenge our physical stamina. The four of us powered on.

At the finish line, people cheered. Hearing the applause and happy hollering was the warmest of hugs. We were not anywhere near the front of the pack, but we were certainly not in the last group of finishers either. We accepted bottles of water and made our way to the grounds where picnic lunches waited for us. As we sat in the sun, the mud dried on our arms and on our legs as we ate turkey sandwiches. I looked up to see the faces of each of my children and my husband. I realized, once again, I am the luckiest woman alive.

The past few years have been especially tough. There has been loss, intimidating obstacles, and it has been hard to find my footing at times.  I’ve fallen. I’ve gotten hurt. I’ve wanted to stop and pull myself off the course. But I kept going. I got up every time I fell. And I’ve grown stronger. Life isn’t always pretty. It gets messy out there. It gets muddy. It’s easy to be overwhelmed by how quickly life changes, with how much it hurts to let go of the past. Frustration sets in when it seems no one quite understands. But whether I’m in mud up to my chest or not, once I stop that inner critic which instigates the doubt, the fear, and the defeat before I even begin, I realize I can power through. Run the course. Set my own pace. Run with the young, the fit, and the brave. Run with others who struggle, for there are many. We all make it through the mud together. We have each other’s back and we are one another’s source of strength and determination.

I’m ready for another race. I see advertisements for charity 5Ks and I think of signing up. Maybe I will. But in all honesty, I’m not sure I need another race to get my heart pumping the way it was last week at the mud run. Time will tell. In the meantime, I am smiling. I felt free when I squashed the voice of doubt in the first 10 minutes of that race. I was strong as I successfully overcame each obstacle. I was powerful as I realized what my body was doing, how I had let go and trusted myself to do it, to succeed. That’s when I defeated the fear. I believed in myself and allowed the arms of the angels to embrace me, mud and all.