How Steep the Path

With one daughter finishing up her final few weeks at college, and the other spending her vacation week helping Habitat for Humanity, my husband and I realized this week off from school was going to be “just the three of us”. But our son had other plans. At 12 years of age, it hadn’t taken Paul long to find two friends who, like him, were not taking off on flights to Florida or the Caribbean for “Spring Break”. By the time vacation began, a scheme of steady sleepovers had been hatched and my son’s “staycation” was fully mapped out. After a night of hosting a couple of his friends here at our home, our son went AWOL. He took off to spend the next day and the next evening and the next day at his buddy’s house.

An orthodontist appointment would demand his return to his father and I. Picking him up at his friend’s house in the middle of the afternoon, I had high hopes for the three of us. We would go to the appointment then grab a quick dinner and catch a movie. But as he slid into the backseat, it became quickly apparent that he was not looking forward to his evening with Mom and Dad. With a few grunts of “I’m not hungry” and “There isn’t a movie I want to see”, it was clear we had taken our son away against his will. I suddenly felt compelled to “win him over”. What a mistake. I don’t know why, but on this night, I took his boredom and annoyance with us personally. I found myself getting upset over his discontent. I felt insulted that he wasn’t in the mood to be with us. In some foolish attempt to reconnect, I lost my cool with him and then he shut down. The rest of the night was spent in awkward silence. My husband, realizing the tension was between my son and I, chose not to interfere. Neither Paul nor I felt the desire to apologize or to make peace with one another. It seems we’re more alike than either of us would care to admit.

I didn’t understand how I had let this happen. A few days earlier I had been the one to remind my husband of the fact that all Paul wanted this vacation week was to have a chance to spend time with friends. I had defended that desire of my son’s, and my husband and I had agreed he deserved to have his friends over, to sleep away at their houses too, and to simply enjoy the time off “hanging with the guys”. He’d come home a week earlier with news he’d gotten high honors this ranking term and truth is, he’d been quite patient putting his needs aside for his sisters’ activities and/or plans. So we would put off any plan to do anything that would cause him to have to cancel his plans with friends. We figured we’d just work around the house, enjoy reading, and watch some movies. It sounded like a great "staycation" for all of us.

After we returned home from the orthodontist appointment, where there had been NO dinner out and NO movie seen, the two of us had gone to bed without even saying good night to one another. Come morning I knew I had to be the mature parent and talk things out with Paul. So my husband and I sat down with him and did just that. I knew he was still a bit miffed at me, and perhaps rightly so, but after talking, when I forced a hug out of him and saw him smirk, I knew we’d be okay.

It didn’t take more than an hour however for him to approach me with a real hug...well, as real as a hug can be when the next words out of his mouth would be, “I’ve been invited to spend the night again...”. I shouldn’t have, but I made some crack about the sincerity of the hug and felt the previous evening’s hurt returning. I pursed my lips, raised my eyebrows at him, and then walked into the other room before I said something I would regret. He knew I had planned a hike for the three of us for the next day. I couldn’t help it. I was disappointed.

That’s when I saw him soften. Joining me on the sofa Paul laid out the plan. “What if you pick me up in the morning so we can do the hike together? You can bring me back there after that?” Okay, so it wasn’t without a bargaining chip but it was an olive branch just the same. I accepted it and we moved on...for real this time. 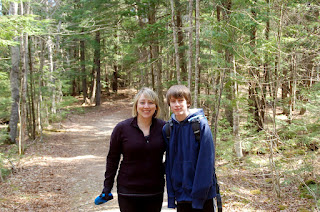 The next morning, our trek, our first hike of the year, felt a bit steep and we all felt a little out of shape. But we made it to the top and together we took in the view. Getting to the top wasn’t without a few struggles, a couple of scrapes on rocks and twigs we should have darted around, but we got there just the same. And the journey itself was beautiful. As we made our way up the mountain, my husband snapped a few pictures of Paul and I together. No longer that little boy, Paul has matched me in height and he’ll most likely surpass me soon. And although I’m sure I’ll continue to stumble at times and say the wrong things and wish too hard that he wasn’t growing up so fast, something tells me that no matter how steep the path gets, he and I will always find our way to the top...together.
Posted by Anne at 12:00 AM